The 2020 Wisconsin IPA Fest is going virtual. Tickets to this year’s event include a mixed 12-pack of special IPAs from some of your favorite Wisconsin breweries, admission to the virtual festival, a WI IPA Fest sticker, and this limited edition glass. To join the event, please purchase a GA or VIP ticket here. 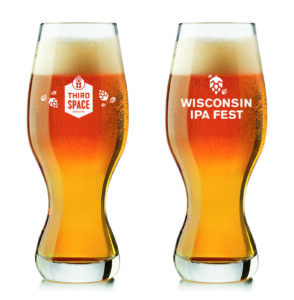 Every year we host the Wisconsin IPA Fest at Third Space Brewing. We invite every brewery in the state who would like to join us with their best IPA and then ask Wisconsin hop lovers to sample IPAs and pick their favorites.

This year we have converted Wisconsin IPA Fest to a virtual event with a special mixed 12-pack of limited edition IPAs.

Check out the full IPA list below. There are some very special and hard to find brews on the list. Keep an eye on our Instagram this week as we will go live with the brewers from many of the participating breweries to talk about their IPAs.

Check out the 12 breweries in the mixed 12-pack here (we’ve had to make one change. 3Sheeps had to drop out but Broken Bat will take their place): 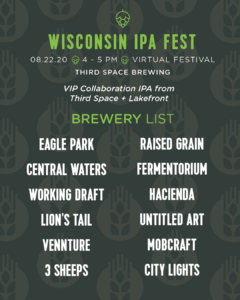 The virtual fest will take place on Zoom Saturday August 22nd from 4-5 p.m. The virtual fest will include head brewers and owners from the 12 breweries participating in this year’s event. Each brewer will give a quick presentation on his or her IPA and be available for questions from our IPA Fest host and from attendees. The event is a great chance to chat with some of your favorite Wisconsin IPA brewers and fellow hop lovers.

VIP ticket holders will get a 4-pack of this year’s Wisconsin IPA Fest Collaboration IPA. This year, we will collaborate with the first place winner from the first ever Wisconsin IPA Fest, Lakefront Brewery. The collaboration IPA is actually a Double West Coast Style IPA brewed with a brand new hop, Solero from Germany. We are told we are only the 2nd brewery in the United States to brew with this hop! Expect notes of tropical fruit, mango, and passion fruit.

VIPs will also be invited to a special VIP Hour on the Virtual Fest from 3:00-4:00. The VIP Hour will feature a Q&A session with the Brewmasters and Co-Founders of Third Space Brewing and Lakefront Brewery, Kevin Wright and Russ Klisch, respectively.

The VIP Hour will also feature a special guest. We have invited the Director of Sales & Marketing from one of our key hop suppliers, Hopsteiner, to chat with us. Doug Wilson from Hopsteiner will be talking about their hop breeding program, new hops coming out and the hop harvesting process. He knows everything you may ever want to know about hops. Join us with a VIP Ticket to learn all you’ve ever wanted to know about that magical plant that makes IPAs happen.

Ticket holders will need to pick up their mixed 12-pack, glass and sticker at Third Space Brewing between August 16-20. No exceptions permitted. Please pick up through our Curbside Pickup process. Just pull into Third Space Brewing’s parking lot and call us at 414-909-2337. Have your ID and your ticket ready. We will check your ID and ticket through your car window and leave your package on the barrel in front of your car for you to load.

The pick up hours are as follows:

We’ve had some trouble keeping our new seasonal Hazy IPA, Why Wouldn’t Cha? in stock this summer as it sells just too darn quickly. With this IPA Fest ticket option, you can reserve a 6-Pack of Why Wouldn’t Cha? to enjoy along with your IPA Fest 12-Pack or at your leisure.

Check out the list of IPAs included in this year’s mixed 12 pack. 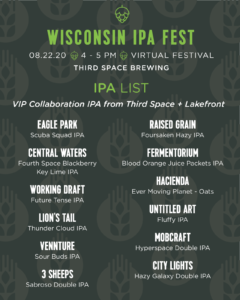 Check out all the details for the 12 IPAs included in the mixed 12-pack that comes with your Wisconsin IPA Fest Ticket.

All Articles Up Next: New Limited Release Cans Are Coming In Our Beers About Nothing Series
×