No trick, all treat. Third Space releases its first In the Spirit series barrel-aged beer

It was only back in January when I was writing about Good City Brewing Company making its Madison debut, and thinking yep, this’ll probably be the next Milwaukee beer to succeed statewide. Hoppy standards, a young but promising barrel program, canned releases and good branding. That must have been the moment when Third Space Brewing uttered, as the kids say, “Hold my beer.”

Third Space still isn’t distributing in Madison, but that hasn’t hurt its ability to generate hype. Winning a gold medal in the rye category at the Great American Beer Festival in Denver earlier this month for its Unite the Clans Scottish ale certainly didn’t hurt. Like Good Company, Third Space has a hoppy flagship: Happy Place, a pale ale that has also served as a springboard to even hoppier and, of course, hazier places in the Third Space lineup.

Hops still drive the bus, it’s true, but a good low-allocation, get-in-line, barrel-aged bottle release will also rev the engine just fine, thank you very much. Such was the case on Saturday, when Third Space officially released its first In the Spirit series barrel-aged beer, a “candy bar porter” called Haunted Barrel.

Haunted Barrel spent time in both bourbon and rum barrels (separately, then blended), and features the trick-or-treaty influences of coconut, cacao nibs, vanilla, and cinnamon. An even more limited variant, Haunted Hazelnut, jettisons the cinnamon and bourbon barrels in favor of hazelnut extract and an exclusive stay in a rum barrel (“our favorite rum barrel,” says Third Space co-founder Andy Gehl). 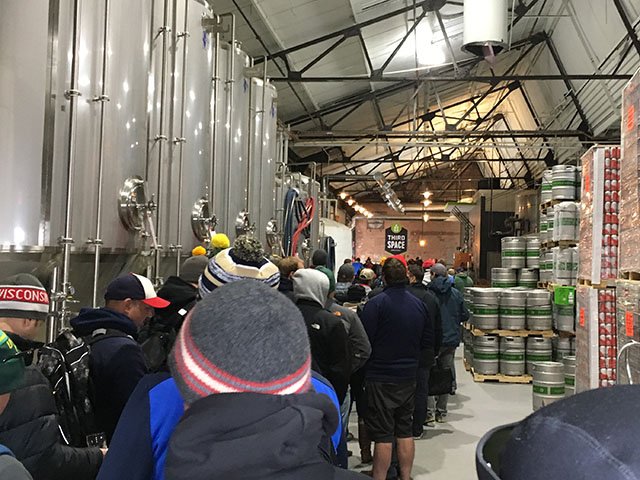 Blessed warmth as the bottle sale began in earnest inside the brewery.

Thirsty fans were limited to three bottles per person of Haunted Barrel at a not-insignificant cost of $20 per bottle. There were about 750 bottles sold. The most contentious abbreviation in craft beer, “1pp,” came out for the Haunted Hazelnut, with buyers limited to one per person while supplies lasted. Spoiler alert: They didn’t last long.

In fact, it was the concept of beer panic, when you start to wonder if maybe you should get there juuuust a little earlier to make sure you get your full allocation of whatever’s being sold, that helped make quick friends of the three guys around me in line. I didn’t want to get up stupid-early, but I did want to try for the hazelnut version. I ended up arriving just after 10 a.m. for a noon release, grabbed a delicious Thai chicken hand pie, coffee, and a brownie from the Drift food cart, and settled into line with my soon-to-be Untappd buddies.

Two of them arrived together, having texted back and forth about when was the right time to get there and not miss out on the hazelnut variant. The third showed up solo, and was himself waffling on whether or not to max out his allocation on a beer neither he nor anyone else had ever tasted. Spoiler alert: he maxed it out.

The saving grace of that leap of faith was that both Haunted Barrel and Haunted Hazelnut turned out to be pretty darn good. Both were on draft in the taproom and available after bottles had been retrieved — crafty, Third Space, crafty — and though the lone ⅙ keg of Haunted Hazelnut kicked within an hour, the short pours meant plenty of folks got a sip.

Haunted Barrel is aptly named; though there are loads of flavor adjuncts, the barrel features most prominently. A little cinnamon wafts by your nose, but the coconut and vanilla were underplayed. The Haunted Hazelnut, on the other hand, delivers major waves of hazelnut sweetness over sides of that rum barrel. It’s a treat, and the 150-ish bottles that were sold should by all rights be consumed quickly to really experience the sugary wallop. 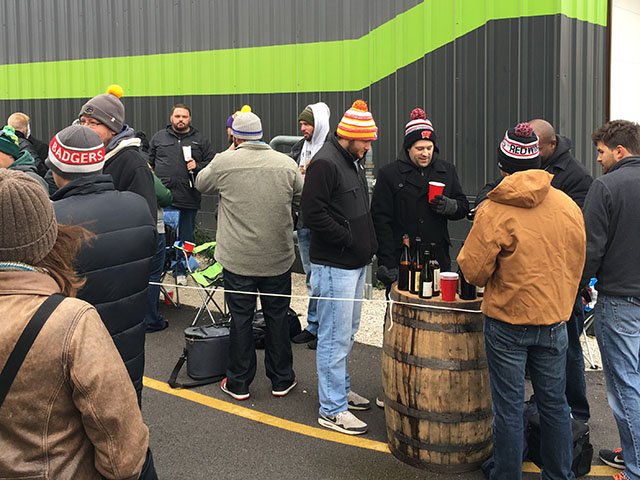 The bottleshare was strong at the front of the Haunted Barrel line.

“We were humbled that so many people showed up and showed up early,” Gehl told me via email. “We sold out of all bottles within an hour and a half.” Gehl says that future In the Spirit releases are planned for the months to come, including a version of Liquid Layers Barley Wine aged in rye, bourbon, rum, and port barrels released on Black Friday. A bourbon barrel-aged Russian imperial stout will follow in early December, and an imperial coffee cream stout aged in Jameson Irish Whiskey barrels in time for St. Patrick’s Day 2018.

To respect Third Space’s recent national successes, I did order a small pour of the gold medal-winning Unite the Clans — I really can’t say enough about the name, which has me repeating it in the Braveheart intonation every time — but I don’t think I was doing it any favors. The Haunted porters did not play nice on my palate, savaging the rye Scottish ale like Robert the Bruce betraying William Wallace. Spoiler alert: 1995.

And after all that sweet, a little salt was in order. I’d heard just enough raves for Doc’s Commerce Smokehouse, which was conveniently just a couple minutes away from Third Space, to not be able to resist. I’ll always order a brisket sandwich, and for this one, a heaping portion of smoky, barky meat dwarfed a sturdy bun. The mac and cheese was a bland miss, but I’d take more pickle slices in its place if I could. The tomato-heavy barbecue sauce was unnecessary; the slice of lemon icebox pie on the other hand was very necessary.

My spur-of-the-moment crew and I discussed Wisconsin beer releases, the nervewracking stakes of the beer trading world, and naturally, the Madison/Milwaukee disconnect. It’s a disconnect that only persists so long as the people from those cities aren’t in the same room. We all hit it off over shared interests, to say nothing of our mutual appreciation for these Haunted releases. Maybe we’ll all trick-or-treat in the same neighborhood next year, too.

Keep an eye out over the next few months, as Andy Gehl tells me there are a small number of ⅙ barrels and bottles of both variants that, like the candy your parents don’t want you to eat all at once, will be slowly parceled out, mostly at Milwaukee area bars and other events in the future.

All Articles Up Next: THIS LOCAL BREW JUST WON A NATIONAL AWARD, PROVING MILWAUKEE IS A BEER TOWN AGAIN