$75 to join for the year. Space limited to 200 members. Purchase in the taproom. 2019 members will have first priority in joining the following year.

Our member t-shirts are now in. If you are a current member, stop by the taproom to pick up your free shirt. If you haven’t yet joined, we will do a second round of ordering this fall so it’s not too late to get this fun benefit of being in the club. 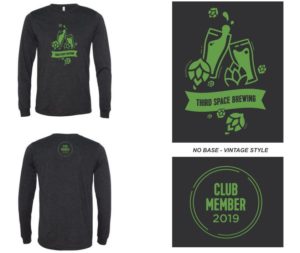 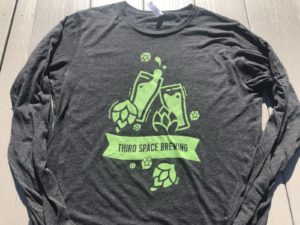 We recently completed the nomination period for our member-only beer, created by our members. Our brew team has selected the top five options they are excited and able to brew. Members may vote for the beer they would like us to brew by visiting our taproom between now and June 30, 2019. Members may vote once per visit. The choices are:

If you are not yet a member, join before June 30 if you would like to have a say in the member-only beer we create. This beer will be brewed in the fall and be released at our member appreciation party in November. Only members will be permitted to drink it on draft in our taproom or to purchase a limited number of cans of it.

It’s not too late to join our My Third Space Club for 2019. Member benefits are vast and there is plenty of time left to get your money’s worth, not to mention the t-shirt, member party and member-only beer perks. To join, ask our bartenders for a registration form in our taproom.

All Articles Up Next: Third Space Beer Is Coming To Madison
×