In the Spirit Barrel-Aged Series Going to Cans!

We are excited to announce that we are shifting the format of our In the Spirit barrel-aged series to 12oz cans. The change will officially start with the first ever release of our Barrel-Aged Liquid Layers Barleywine in a mixed 4-pack of cans on Black Friday (November 29).

Nexus of the Universe Barrel-Aged Russian Imperial Stout and Mystic Knot Barrel-Aged Irish Coffee Stout will also be put into cans this year! 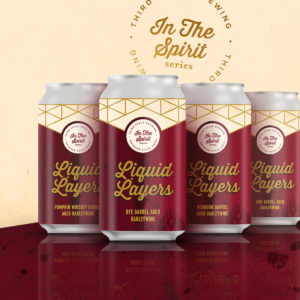 Each year we take our Liquid Layers Barleywine and age it in a variety of spirit barrels.  This year’s variants are: bourbon, rum, rye and a special pumpkin whiskey barrel. This is the first year we have ever packaged the Barrel-Aged Liquid Layers.

We will sell all 4 variants in a mixed 4-pack of 12oz cans for $20 each. We have less than 200 4-packs available. Sales will begin at 11:00 a.m. when we open our tap room early on Black Friday. We will also tap a few other limited kegs of our In the Spirit Barrel-Aged beers on  Black Friday. Check out the details for this event in the Facebook event here. 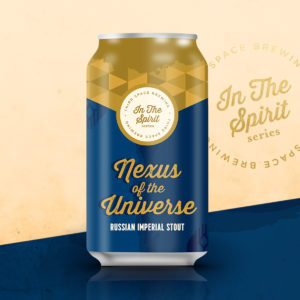 Nexus of the Universe

Nexus of the Universe is a Russian Imperial Stout aged in bourbon and brandy barrels for nine months with cacao and vanilla added. Release Date: December 14, 2019.

Nexus of the Universe will also be sold in 4-packs of 12oz cans this year. 4-packs will be $25 each.

Nexus will have three special variants this year.

The first variant is a very special Double-Barrel Nexus. This stout has aged a total of 21 months, first in a bourbon barrel and then in a port barrel. It will be sold in 500ml bottles for $20 each.

The other two variants will each be sold in 12oz cans for $10 each.

Tom and Jerry Nexus is based on the classic Wisconsin holiday cocktail. We took our favorite brandy barrels and added lactose, vanilla, nutmeg, allspice and clove.

Be sure to RSVP to the Facebook Event to stay up to date on release details: Nexus of the Universe Event Details. 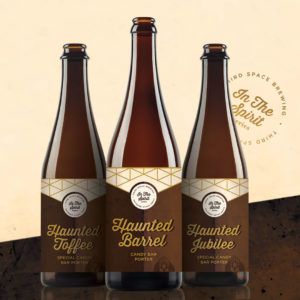 We kicked off the third year of our In the Spirit Barrel-Aged Series Saturday October 26th with the release of Haunted Barrel Candy Bar Porter and two special variants, Haunted Toffee and Haunted Jubilee.

Haunted Barrel is an imperial porter aged for six months in rum and bourbon barrels with cacao and vanilla added. Haunted Barrel was the last of our In the Spirit barrel-aged series to go into bottles and we still have some bottles of the main beer available for sale in our tap room for $20 each.

We will also be releasing our Mystic Knot Irish Coffee Stout in March 2019 but the date has not been set yet. Mystic Knot and its own special variants will also be put into 12oz cans this time around.

Mystic Knot is an Irish cream stout that ages for six months in whiskey and bourbon barrels with Stone Creek coffee added. The flavor profile mimic an Irish Coffee. Stay tuned for details.