“We are proud to honor 115 years of American history with a Wisconsin-made beer that celebrates freedom for all,” said Chris Urban, Manager of US Events, Harley-Davidson. “Whether you’re joining in on the excitement and thrill of motorcycle culture or simply a craft beer enthusiast, this light and refreshing beer is the perfect way to enjoy an anniversary like no other.”

The limited edition beer is a light golden color lager with a bright and slightly fruity aroma.  It is brewed with all Wisconsin malts, grown right here in Milwaukee, and traditional German Hops that provide a light bitterness with a very refreshing finish. The can’s design features the limited edition, tattoo-inspired denim paint scheme and eagle design created for this milestone anniversary, which is currently available on select 2018 models.

“As Milwaukee natives, we are excited to be a part of this historic celebration and showcase the great beer – and iconic motorcycles – the city has to offer,” said Andy Gehl, co-founder of Third Space Brewing. “With locally sourced ingredients and decked out in anniversary blue, the 115th Anniversary Milwaukee Lager marks the epic occasion with unmatched taste and revved-up flavor.” 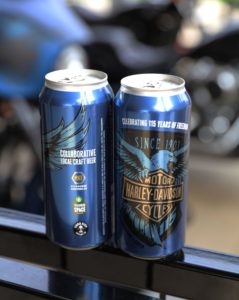