Haunted Barrel is an imperial porter brewed with a hint of coconut and aged for six months in rum and bourbon barrels with cacao nibs, vanilla, and cinnamon added. It is the ultimate adult trick-or-treat beer, arriving just in time for Halloween. Two special and limited variants will accompany Haunted Barrel this year: Haunted Maple and Haunted Joy. Haunted Maple was aged in a maple bourbon barrel with maple syrup, maple sugar and vanilla added. Haunted Joy was aged in a bourbon barrel with cacao nibs, vanilla, coconut and almond added (think Almond Joy candy bar).

All three beers will be released on draft at 11:00 a.m. in Third Space Brewing’s taproom at 1505 West Saint Paul Avenue in the historic Menomonee Valley. Third Space will also sell a limited number of each beer in bottles, also commencing at 11:00 a.m. Haunted Barrel will be sold in 750ml bottles and the two variants will be sold in 500ml bottles. All bottles are $20 each. The variants are more limited than Haunted Barrel.

Haunted Barrel was the first release from Third Space in 2017 in the In the Spirit Barrel-Aged Series. Four of the beers from the 2017 In the Spirit Series are slated to return in 2018/2019:

Asked why he enjoys making barrel-aged beers, Third Space Co-Founder and Brewmaster, Kevin Wright, explained “working with barrels allows you to achieve flavors you cannot obtain in the normal brewing process, flavors from the spirits themselves but also great oak and vanilla flavors from the barrels and complex flavors from the aging process.”

Third Space Co-Founder and Director of Sales and Marketing, Andy Gehl, added “the In the Spirit Barrel-Aged Series releases create a fun atmosphere for fans of Third Space to gather around great beers. Our customers often line up outside the brewery well in advance of the release and then spend the day in our taproom enjoying our barrel-aged creations and enjoying each other’s company.”

For the Haunted Barrel release on October 27, Taqueria La Guacamaya Food Truck will be in attendance to serve both breakfast and lunch.  To get everyone in the Halloween spirit, Third Space will be giving away a set of last year’s Haunted Barrel and it’s variant, Haunted Hazelnut, to the wearer of the staff’s favorite costume among those in line for the bottle release. 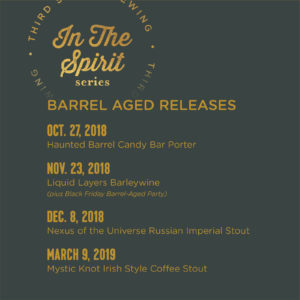