It Was All A Dream Returns

Friday May 25th, we are bringing back a fan-favorite when It Was All A Dream Juicy IPA returns to our tap lines and hits our shelves with 16oz 4-packs. We describe It Was All A Dream as “a notoriously juicy IPA with a super peachy aroma and notes of pineapple and passion fruit. If you don’t know, now you know.”

If you don’t know, Juicy IPAs pack a ton of juicy hop flavors and amazing hop aromatics with a very clean bitterness. We’ve made other Juicy beers in the past, including our Juicy Double IPA, Unbridled Enthusiasm and the 2017 version of It Was All A Dream.

The return of It Was All A Dream to the Third Space line-up is something to cheers not only because it is a tasty beer but because it is a beer that almost disappeared into history as a one-time only brew.  The idea for It Was All A Dream sparked after our Brewmaster and my Co-Founder, Kevin, got his nose into a handful of the, at-the-time experimental, hop HBC-438. It was a hop that did not even have a name yet because the hop producer was not sure it would be picked up commercially. Kevin fell in love with the super peachy aroma and decided to build a beer around that hop and another relatively new hop known as Denali (known for pineapple and tropical fruit notes).

We released It Was All A Dream for the first time in May 2017 to major excitement from our loyal customers. Dream was released on draft only and was a very popular beer in our line-up last summer.

Because HBC-438 was only experimental, we had no guarantee that we could ever get our hands on it again. Had HBC-438 not been picked up commercially, It Was All A Dream would have drifted away as a happy memory. Thankfully, Kevin received the great news earlier this year that this amazing hop would be commercially produced and given the name Sabro, which means “tasty” in Spanish. Kevin had to pull some strings to get a sufficient allotment of the new hop to brew the amount of Dream we plan to release this Spring.

Thankfully we secured enough Sabro to release It Was All A Dream both on draft and in cans this year. That’s right, the Juicy IPA will also be available in 4-pack 16oz cans both in the Third Space taproom and in early June at liquor and grocery stores throughout Southeastern Wisconsin. 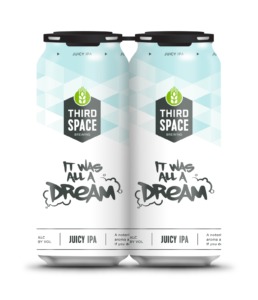 It Was All A Dream will return this year on Friday May 25 when our tap room opens at 2:00 p.m., kicking off a wild Memorial Day weekend at the Third Space taproom and beer garden located in Milwaukee’s Menomonee Valley (1505 W. St. Paul Ave).

For the holiday weekend, we will have special hours on Sunday (12-10pm) and Monday (12-7pm) and will have a litany of food trucks on site throughout the weekend. Check out the food truck schedule here. This weekend will also kick-off our new summer hours. Going forward we will now be open from 12-7 p.m. every Sunday (with extended hours Sunday May 27).

We hope you’ll join us in the Beer Garden this summer and enjoy a few pints of It Was All A Dream while you’re there.

Co-Founder and Director of Sales and Marketing

All Articles Up Next: Milwaukee Beer Week Schedule April 14-21
×